Kompero open-air museum is located on a picturesque island in the middle of rapid Siikakoski in river Taipale. It provides an insight to the local history of village Kompero in the municipality of Liperi in Eastern Finland. All the museum’s eight buildings, net shed and shadoof are of local origin and donated to the museum by individuals. The museum was founded in the beginning of the 1960s by Kompero’s heritage society and since the beginning, the museum has been run and maintained by volunteers.

The centre of the village Kompero is the Siikakoski rapid in the river Taipale. Running water of the river has been a source of energy for centuries and its first water mill was built in the 16th century. After founding a sawmill and a textile mill in the 19th century, Siikakoski grew to become a densely populated and regionally significant industrialised area. At the time, Finland was a principality of Russian empire and consequently the textile mill produced clothing and blankets mainly for the soldiers and horses of the Russian army.

The Siikakoski sawmill was built in 1833 when a merchant, Machar Gurtsjeff from Kuopio, applied the provincial court for a right to establish a mill in rapid Sukkulakoski in the river Taiple. Gurtsjeff was about to be granted an annual licence for 10 000 logs but the proposal was overruled by a merchant and sawmill owner Nils Ludvig Arppe, who himself was also interested in the timber of Liperi forests. Consequently, Gurtseff received a licence for 6 000 logs but died shortly after the senat granted him the right to build a sawmill in February 1837.

Having heard the misfortune of Mr. Gurtseff, a trading firm from town Viipuri, Hackman & Co, bought the sawmilling licence and applied for a right to build a mill in a faster flowing rapid of Siikakoski. The sawmill was built in 1841 and qualified workers from the surrounding areas as well as from the other provinces of Finland started to move into the area. Unfortunately, running the mill turned out not to be as profitable as the owners had hoped for.

In 1859, the fate ruled the game. As a consequence of a mismanaged drainage of the lake Höytiäinen, the river Taipale, and the sawmill in it, lost half of its water flow. The impact of the drainage can best be understood when considering that before the drainage during high waters the people from village Viinijärvi could row to the church and back via river Taipale. Despite the loss in water flow the sawmill continued to run under several owners until the 20th century. However, the golden ages of the village were over and Kompero becan to recess. On November 17th 1965, Kompero faced its most recent cultural loss as the wheat mill and its adjacent sawmill and planing mill burned to ashes. Nowadays the renovated ryemill, ruins of an old stone bridge and the remains of waterway remind us of the old glory of the area. 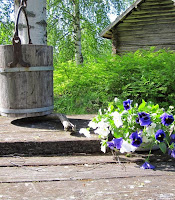